It is an impressive ninth century fortress which dominates the valley of the river Cardoner.

The Parador sits on top of a hill. In 986 A.D. it was decreed that the local population could have salt every Thursday in return for one days work a week maintaining the fortifications. 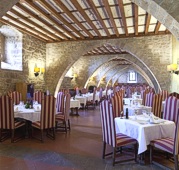 Within the castle is the church of San Vicente which was built in 981 and enlarged 40 years later.

The 2nd century Minyona tower is reputedly have been the prison of Adeles, the daughter of the Duke of Cardona, who was held by her brothers after falling in love with a loader of the Moors and had converted to his religion, She was only incarcerated for a year before she died.
Incorporated within the Parador is a gothic cloister, the Duke's patio and an ancient cistern for the storage of water. Everywhere there are moats, towers and walls to defend the castle.

There are numerous with decoration in keeping with the surroundings. The furniture is of medieval designs but with modern comfort being important. Walls are decorated with tapestries and wrought iron torch holders. 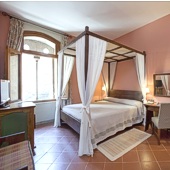 Many of the rooms have old four poster beds and splendid views.

There is a hotel restaurant and a bar. Other facilities include a gymnasium and a sauna.

The Parador has conference facilities.

The Parador has a medieval restaurant which brings images of the ducal feasts held within the castle. The chef specialises in Catalan cooking and some of his specialties are:

During the season, delicious dishes made with wild mushrooms are available. The meal can be finished with a selection of cheeses from the impressive cheese and sausage board. 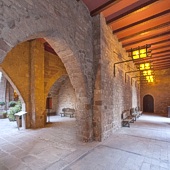 The castle has seen many battles in the past and is reputedly to have been attacked by Charlemagne, William the Hairy and Almursur the Moor.

It was extensively damaged during the Spanish Civil war of 1936-39 but was restored and opened as a Parador in 1976.

From the Parador, the Roman Bridge crossing the river can be seen. In former towns it was a road much used by the early Christian pilgrims.

On a clear day it is possible to see fifty kilometres to the strange serrated hills on which the Monserrat monastery stands. If visiting, enquire of the times that the "Escolania" is singing. This is one of Europe's most famous boy's choirs.

Animals are not allowed.